Staff member
Registered User
Ive just been given a large box which has quite a few boxes of paper, many not even opened.
Now I know the chances of getting an image onto the paper maybe slim due to its age but thats for another day. 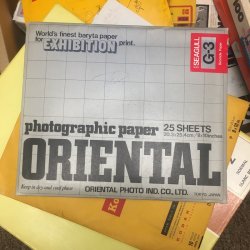 Inside the box was also some 5x4 film un-opened and one which looks interesting is a box ok Kodak Technical Pan 4415 and also an up-open box containing 6 bottles of Technidol developer.

Has anyone any got any experience with Kodak technical Pan for Pictorial type of images.

A quick read of the data sheets indicates that using an EI of 200 and HC110 dilution B for 8 minutes is a good start. 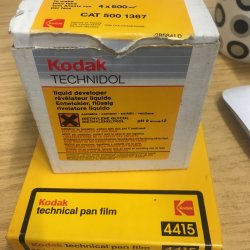 Registered User
Yes. I used to shoot 35mm Tech Pan many years ago for landscapes (cityscapes actually). The developer I used was HC110 and it produced fabulous results, but I can't remember the ISO I used nor the processing details because it is a long time ago. I'm sure posting on the US Large Format forum will produce lots of info though. Great stuff to be given.
D

Registered User
Tech Pan was originally a scientific film. It has extremely high resolution and fine grain, along with extended red sensitivity (red will wind up lighter in the print than they would with common panchromatic films). It has many similarities to document films (aka microfilm), in that it can be developed to extreme contrast at super-high resolution, or to pictorial contrast with some loss of resolution. It also has nearly perfect reciprocity (or in other words, almost no reciprocity failure), which made it the number one choice of film for scientific astronomy, both to record images and to record spectra.

Tech Pan was ASA 25 for most pictorial purposes, and as such generally is ageless -- no additional exposure needed, little to no age fog to be expected.

IIRC, Technidol was the developer made to render pictorial contrast, and there should be instructions on/in the box of both products for processing Tech Pan in Technidol (and confirming my memory of the ASA speed -- Technidol may require downrating the film due to the low contrast; if so, consider mixing your own developer to the POTA formula).

Registered User
Tech Pan was used by some of the New Topographers in the early 1980's, John Gossage "The Pond" is a good example. They wanted to be the antithesis of the approach of AA, Weston, minor White, an emphasis on environment issues over the beauty of the landscape. Using Tech Pan and it's starker tonality was one approach.

The Techidol is almost certainly useless by now, the Tech Pan may well be OK, you'll need a low contrast developer for Pictoral contrast, it has an inherently high contrast with more normal processing. Very dilute HC110 or Ilford Ilfotec HC/LC or perhaps a print developer like PQ Universal at 1+ 39.

I used it and didn't like the results for Pictorial work but used it for copying maps etc where it's high resolution and contrast made it ideal.

Registered User
.....by contrast (pun intended) to Ian's last sentence, I loved using Tech-Pan for pictorial work though i only ever got the chance to use it in 120 format.

I have a fridge-drawer full of Tech Pan in 35mm, but as i can't remember the last time i shot 35mm, it'll probably stay there for a long time.

One of the peculiarities of using Technidol with 120 was that you were instructed to lower the film in the spiral into a tank of developer then put the lid on rather than add the dev to a loaded tank. I think this was to give the film an even covering of Technidol as soon as possible.

Use the film Ian-B, but remember, don't get too attached......it's only one box

Registered User
Little story about Tech Pan. When I was a student in London I worked in a well-known camera shop (now gone sadly) and we supplied some of the newspapers. Although I did MTF testing of lenses, one lens came back as the photographer who had been issued with it couldn't get sharp results, and I was asked to test it with film. So I shot a roll of tech pan and of course it was a perfectly good lens which the film showed up absolutely clearly (overkill). The editor was amused and muttered something about a 'dressing down'!

mpirie said:
.....by contrast (pun intended) to Ian's last sentence, I loved using Tech-Pan for pictorial work though i only ever got the chance to use it in 120 format.
Click to expand...

Part of my not taking to Tech Pan for Pictorial (in my case landscape) work was my personal work was already project based and images made with it would be a complete mismatch tonally compared to the Agfa AP/APX100 or AP/APX25 film I was then using exploiting their long tonal range.

It is a film worth trying and experimenting with. I stall have a bit left but I'd guess I bought it around 1987. By then I'd been aware of the work of John Gossage and Robert Adams etc so knew the look it gave.

Registered User
"Agfa AP/APX100 or AP/APX25" ....another pair of long gone and much missed films

Registered User
Like Mike, I made some nice landscape style images on Tech Pan 120; developed, at the time, in the proprietary developer. Several years ago, I was given several rolls of 35mm Tech Pan and had great success processing in 510-Pyro. Since you've used staining developers, you may wish to look at: Kodak Technical Pan film is a specialized film not intended for pictorial photography, but with appropriate development is capable of excel...

I doubt seriously that any Technidol developer available today--either in bottles or the small packets--would be any good.

Staff member
Registered User
Thanks for the comments, I only have the one box so dont want to get attached Toit but on the same note, would be nice to see what it can do

in the Kodak book on LF photography they divide their LF film stock into 6 categories (MF/EF/VF/F/M/C), while the TechPan is the only one classified Micro Fine, so even finer grain than the T-Max 100 and the TechPan also had the highest resolving power (320 lines/mm compared to the 200 lines/mm of the T-Max), so I'd really be interested in knowing if you can still obtain a good negative from this film. Please share your results with the Technical Pan.

The recommended speed for the 4415 was ASA 25 when using the Technidol liquid developer, so it might be quite different with other developers. I think Ian Grant's suggestion of using very dilluted HC110 for this high contrast film is a good starting point, as I assume the Technidol is dead and dilluted HC110 can be used very well in order to reduce the contrast with compensating development. To start out you could dillute HC110 stock solution with water in relation 1:40 (maybe even higher) and give it a try by developing about 10 minutes. Semi-stand development might be helpful here. This is of course just a suggestion, as unfortunately I never could get my hands on this film so far. The suggested dillution/development method works great for high contrast HP5 negs, so it might be worth a try.

Registered User
Before Technidol was introduced Kodak recommended POTA, Phenidone Extended Range Developer for pictorial use probably one of the softest working developers around. It's origins go back to the nuclear testing program.

Technidol used a trace of Hydroquinone as well. Some people used dilute rodinal at 1 to 300.