Registered User
Had a good day at Wolverhampton Camera Fair and a reasonably priced larger TP Roller Blind shutter, this one fit a 3½" lens barrel or integral lens hood.

It fits my 20" Rapid Rectilinear lens perfectly which was a nice surprise.

With a much more common smaller shutter

While the shutter works at all speeds 1/10 to 1/90 and T it's in need of repair and restoration. It's a front mounting version but has been used between a lens and lens board and the front has a couple of splits where it was screwed to the lens board. 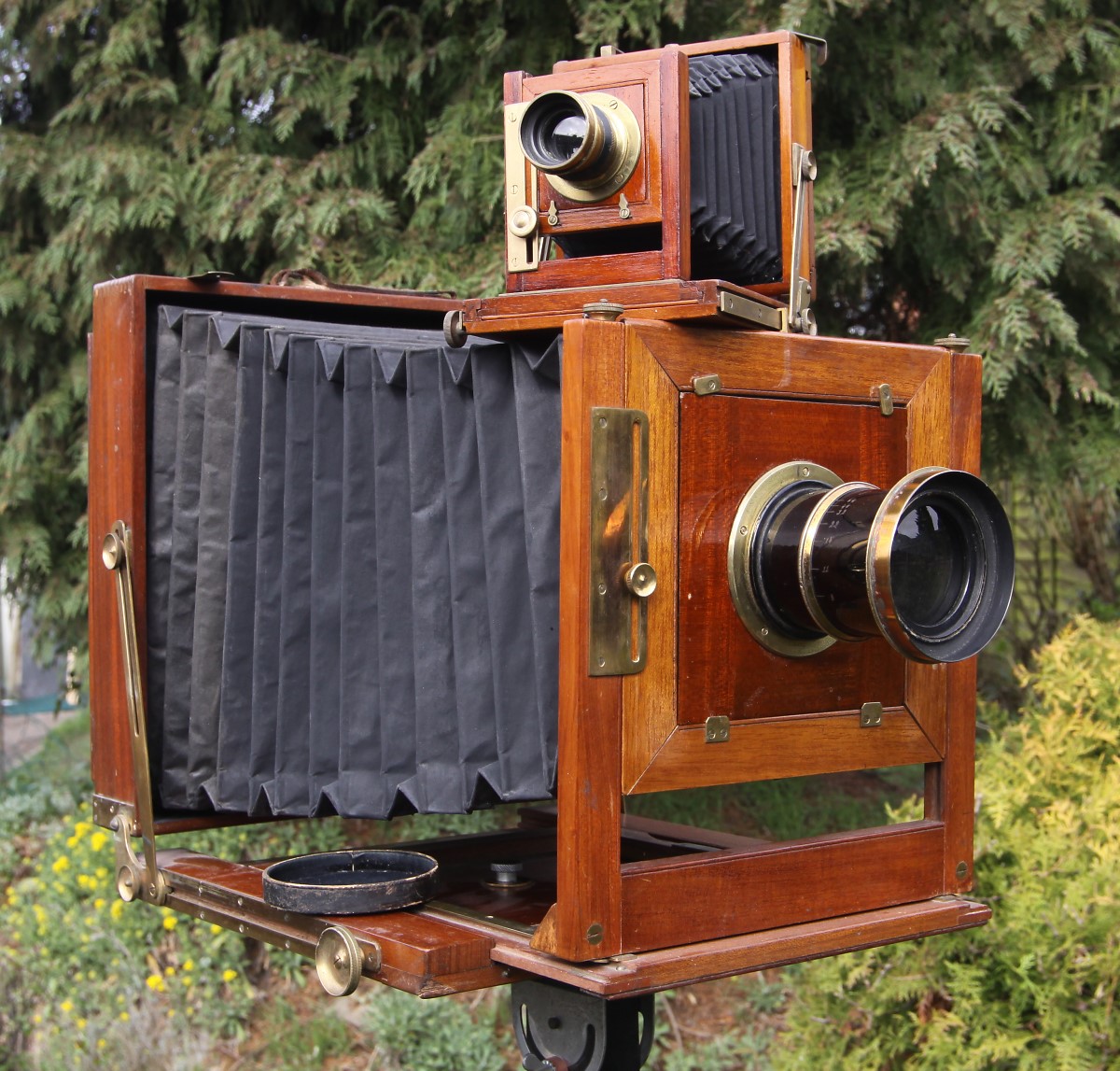 Now I'll be able to use the 20" RR lens on my Agfa Ansco 10x8 cameras, I'll make an adapter to take the lens board. 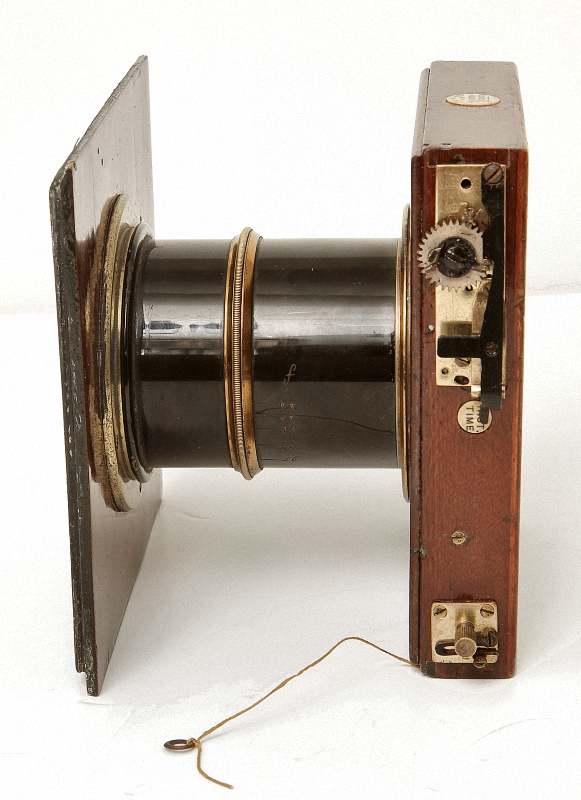 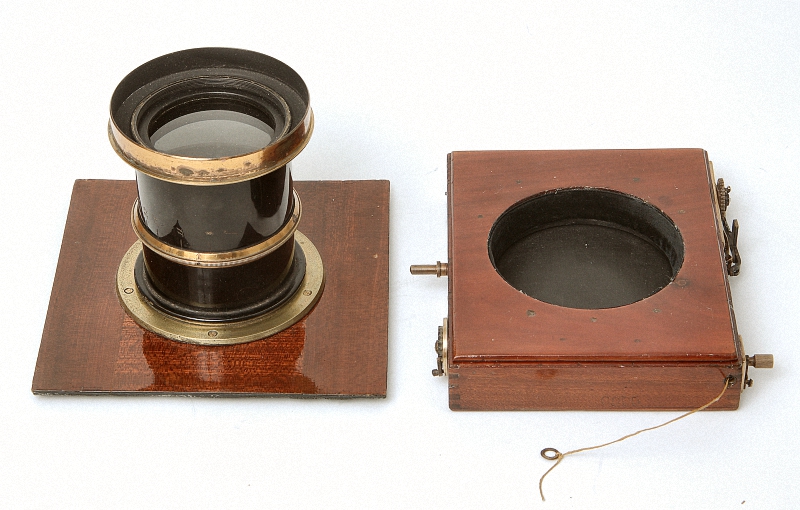 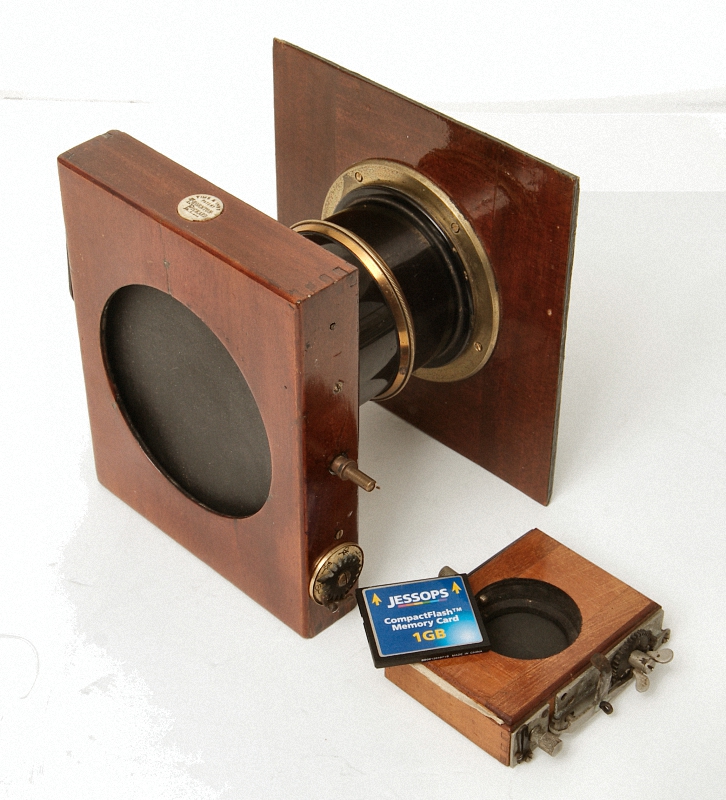 I've also made a conversion lens board so I can use this lens (and lens board) on my 10x8 Agfa Ansco Commercial View or Universal View cameras.

Registered User
I love the digital image capture thingy. Did it take a lot of effort to machine out the slot for it? Nonetheless, only 1GB for a 10x8 image?

Joanna Carter said:
I love the digital image capture thingy. Did it take a lot of effort to machine out the slot for it? Nonetheless, only 1GB for a 10x8 image?

Ironically the High Resolution scans off my 10x8 camera work out around 1GB I went through a small box with some old cards and found my first CF card last night 16mb I don't know why Minolta bothered. The Canon EOS camera that 1GB card came out of won't recognise larger cards.

At least with wood and brass cameras of any vintage we can use old or modern lenses. We don't need to pay the silly prices people pay for things like a modern Petzval for their DSLS.

Registered User
Ian,
Original advertisements for T-P shutters show either a cable release, with a curiously complicated end, or a bulb release that just seems to plug in to the side of the shutter like a single earbud from an iPhone. Do you have any information on these?
D

Registered User
Joanna,
But 16mb was a lot of memory in those days – more than ten times the capacity of a floppy disk. Remember how enchanted we were with the speed and cleverness of digital cameras and how we could do all sorts of totally awesome tricks on our gigantic 10" 72dpi screens?

Registered User
Hi David, I've been thinking of getting some air release bulbs made. The other alternative is Watson made cable releases with various different end fittings, on was for these TP shutters. I have a couple of these end bits and it wouldn't be too hard to make new ones, I also have a competitors alternative and that takes any modern cable release.

There is however a very simple alternative which TP started using, they just drilled and tapped a hole in the release arm to take a cable release, it's there on this shutter to the left of the tab for an air release.

The real heyday of these shutters was 1887 to the early 1900's when almost every British Field camera used one, reliable shutters like the 1904 Compound and later 1912 Compur largely killed them off. They were also bought front mounted for older cameras/lenses. However in that early period the modern cable release as we know it didn't exist so the pneumatic air release was used.

Most people don't realise these shutters were still made after the Thornton Pickard as a Company closed, there was still a repair service and manufacture of these shutters continued until about 1959/60. They are listed in a 1940 Kodak Professional catalogue along with the Pallmeyer Studio shutter (Packard under licence) and Norka but of the 3 they are the only one to offer shutter speed control.

I have one or two TP shutters Well at least 60+ but only 3 or 4 large ones and this is the largest.

Registered User
Thank you,
I wonder why they didn't simply use the "drill a hole" method in the first place. It seems so much simpler. When was the current tapered-thread fitting introduced?

A Watson's 1910 avert shows 8 different shutter release cable all with different end fittings and they list all the well known early shutters. Watson had Patented the "Antinous" shutter release which they claimed superseded the rubber releases. So these are the first cable releases.

The only cable release shown that's close to today's is for an Ibso, but it's a straight rather than tapered thread. My guess is the Compur and Ibsor set the standard for the modern cable release with the exception of early Leica, Yashica etc who used a different release fitting based on one Watson sold in 1910 for Spido and Block Note cameras. Aside from the Compound all the leaf shutters I have from 1912 onwards take a modern cable release.

Alfred Gauthier, Calmbach, introduced the Ibso in 1908 it's a pneumatic speed controlled spring shutter like the compound, I have one and it takes a modern cable release.

I should add that some TP shutter release arms just had a small untapped hole, this could be used with a piece of knotted cord as a release. I've a TP shutter copy in front of me and it has an eyelet in the same position for a cord.

Registered User
It's a pity they didn't make the tapered socket a little bit more robust. It's not quite up to holding the weight of a long cable release, or staying reliably in place when carrying a mounted camera over the shoulder. We can all think of better ways to do things, looking back. They didn't even include iPhone integration, can you believe?

Registered User
Most cable release sockets aren't tapered, it's the end of the cable release itself that's tapered and if the threads on either are worn you don't get a good fit.

The Beck lens on my 110 Alliance Roll Film camera has no cable release socket, it was made somewhere between 1898-1904. 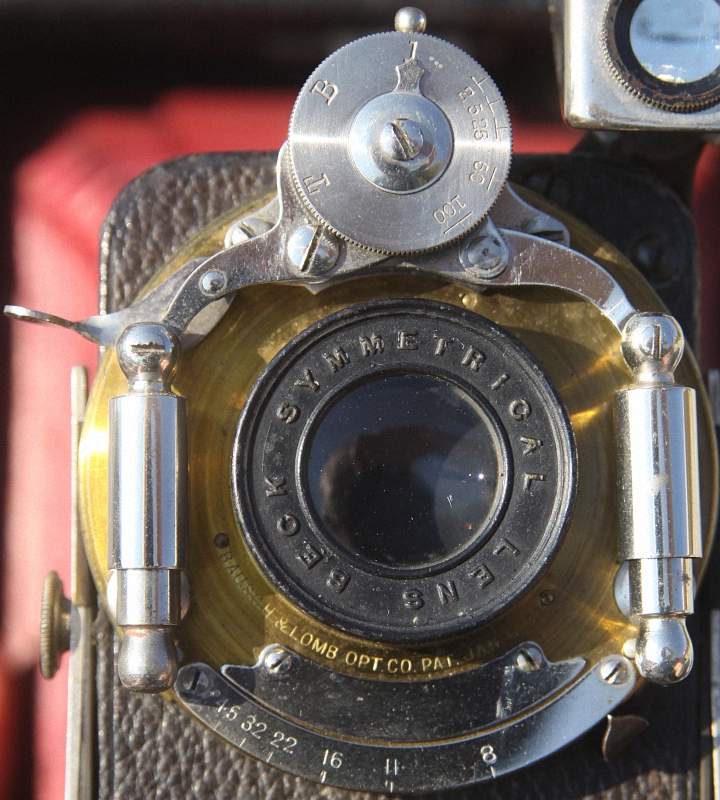 Still works as smoothly as when new

Registered User
I shall have to look more closely.

Staff member
Registered User
I guess your Unicum shutter will accept an air release, mine does

Registered User
I've not tried, although the shutter seems very accurate, 110 roll film is long gone. Some other cameras from the same manufacturer and competitors allowed the use of plates as well as roll film, mine doesn't unfortunately. I'll check mext time I'm in Turkey.

Registered User
I'll take a look at mine in June, I have about 6 of those air releases so can take one with me. I have some similar FL Beck Rapid Rectilinear lenses in barrels, I should try them out.

Is that the Quarter plate camera you wanted film sheaths for ?

Staff member
Registered User
Yes I think it is Ian, the shutter on this runs to fast at the low speeds, not sure if the faster speeds are accurate but they sound about right

Registered User
When I bought my 10x8 Agfa Ansco commercial View camera about 15 years ago the 12" Dagor's Compound shutter was fast at slow speeds, I had to use a couple of drops of machine oil to lubricate the piston dampers. I have some shutter parts that came with a box of cameras and there's some Bausch & Lomb bits, pistons etc I'll check them out. The principle's the same.

Registered User
I've found the shutter parts, I'd not noticed before that the left hand piston (looking at the front) has that hole so you can use an air release. With the Compound shutter when I cleaned and oiled the piston area it dampened correctly.

One of the Unicum piston cylinders is loose (not full attached to the front of the shutter) the piston moved very freely. I've just added a drop of oil and what a difference - now the piston is dampened in the cylinder. It's a bit like a dried out bicycle pump doesn't really work, lubricate the seal and it works perfectly.

I've got a 1917 service guide for shutters, it actually has details for nearly all common leaf shutters (of that era). It lists the E.K. Automatic which is the B&L Unicum. In the introduction it mentions cleaning these dampening pumps, says son't use oil, so I've just cleaned with IPA and the dampening is even better. I've now cleaned checked all 4 pistons and all work as the should, but there's no shutter blades, and the rst of the shutter parts are missing.

Other repair manuals say these pistons should have very light lubrication and one mentions the Compound's pistons. I use sewing machine oil mixed with with a little IPA, applying a drop with a fine screw driver (or seeker from a dissection kit) and once the IPA has evaporated there's just a trace of oil.

Staff member
Registered User
The shutter blades on my lens are transparent deep red, or were until I carefully painted them Matt black.

I suppose the red light that entered through them would not effect the old type film, certanly would fog modern emulsions, that’s why I painted them, no light passes through now.
You must log in or register to reply here.
Share:
Reddit Pinterest Tumblr WhatsApp Link
Top