Show Us Your Camera

Registered User
Here's my Arca Swiss. It's nothing special but has been a very good and cheap introduction into LF for me so far.

How do you find carrying a mono rail round the landcscape

Registered User
It's not that bad to be honest. I've got a pretty big back pack that I can carry it around in, but it needs to be taken completely apart, so that the bellows, lens, back and both standards fit in like a jigsaw. If I'm walking short distances and taking more photos I don't tend to pack it away though, I just walk around with the tripod over my shoulder with the camera on top.

Registered User
This is my camera - a Toyo 45a which is strong and fairly light making it pretty portable.I have a Nikkor W 180 mm lens and a 135 mm Schneider Symmar S which covers most of my requirements although later I would like a longer lens for portraits.

Registered User
Hello Ian, yest it was too thin, so I bought a Ries tripod, far more heavy but also more accurate for the use of the big camera...
R

Peter Lee said:
This is my camera - a Toyo 45a which is strong and fairly light making it pretty portable.I have a Nikkor W 180 mm lens and a 135 mm Schneider Symmar S which covers most of my requirements although later I would like a longer lens for portraits.

Why is there a gas mask in use?
R

Mathieu Bauwens said:
Hello Ian, yest it was too thin, so I bought a Ries tripod, far more heavy but also more accurate for the use of the big camera...
Click to expand...

I've used a tripod far flimsier looking beneath an 8x10 2D A little Gitzo traveller, with the thinnest leg section unused. It worked...better than hand holding! My stronger tripod (a bigger manfrotto) isn't really up to the job either.
I

raiderofthelostseoul said:
Why is there a gas mask in use?
Click to expand...

I wanted to ask the same question

This is the last custom LF camera I built from a Polaroid 110a donor. 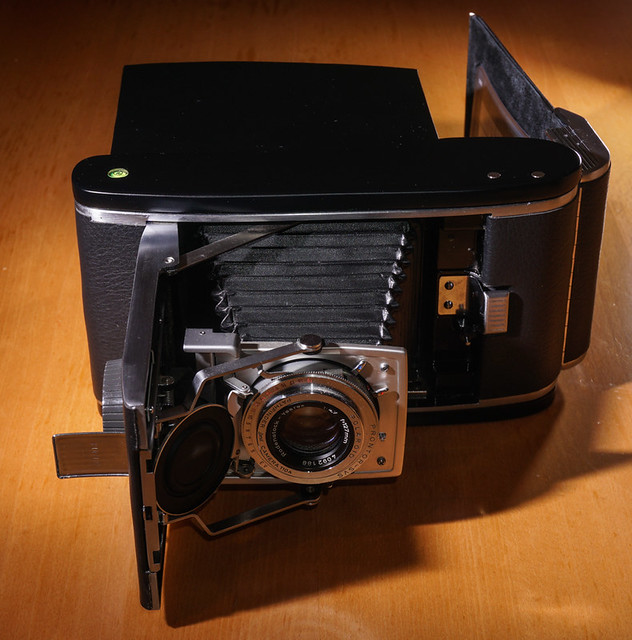 Interesting, there was one on ebay recently, can you get decent focus with it, I mean does it have a coupled rangefinder

Thanks. I removed the original top plate rangefinder entirely because I found it too small and uncomfortable to use. I machined a friction mount on the rear of the body and lasercut a new ground glass holder out of 6mm acrylic so I could slot it into place and focus as with most other LF cameras then remove it and insert a film holder to expose the image. 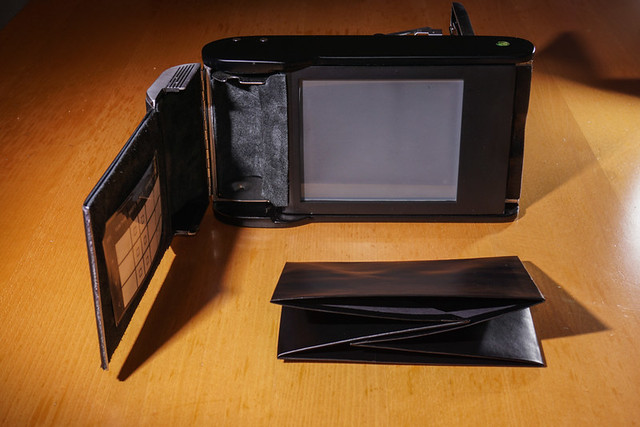 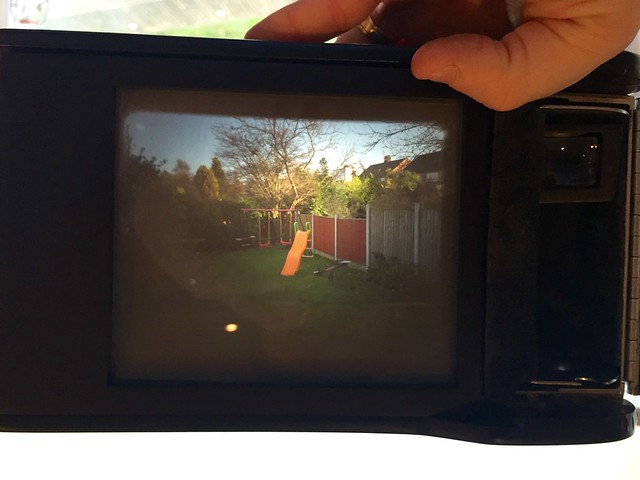 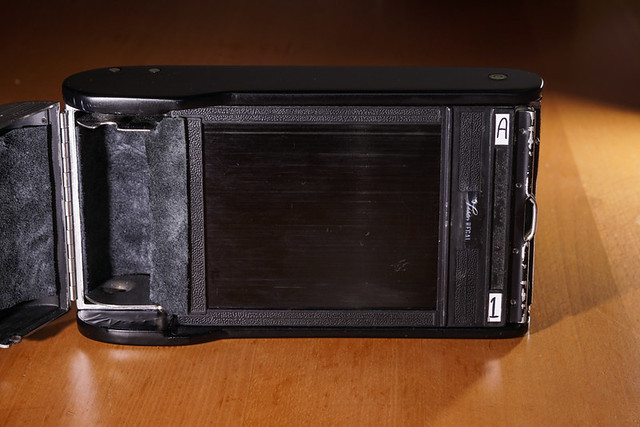 Very good, light and portable, you will not have any movements I guess ?

No, the front standard is fixed on these although I have seen a some builds where a new standard was machined to allow a small amount of movement. I built it with the intention of keeping it small/light and was able to carry it in a small shoulder bag with 2 film holders, ground glass and a compact tripod so I could take it to work and use it at lunchtime etc.

Yes there's is only one small ready built 4x5 out there as far as I know, and at this moment in time I cannot remember its name, age thing lol
I

I have been offered a Walker Titan complete with lens but just wasn't sure about the ABS plastic construction.

I do like the dark cloth press studs idea

Stephen Batey said:
Here's one of me with the Walker Titan SF from earlier this year. Note that the Paramo focusing cloth can be press studded together round the neck to hold it conveniently; and the Billingham waistcoat will happily hold 5x4 double darkslides. The tripod is a Manfrotto carbon fibre model.

We already get enough funny looks for using large format cameras, not sure that wearing a cape is going to help!

I have no problems at all with the ABS. It's solid and stable. I have three 5x4 cameras, all vastly different from each other: a Wista DX, a Canham DLC45 and the Walker Titan shown here. I'll put up photos of the Canham later, but I'll add a photo of the Wista at the end of this thread.

The Wista is the prettiest, hands down. Everyone like the look of it, as it's a traditional looking camera in wood. It's also the lightest of the three, and is the easiest to get into my Lowepro backpack (which was actually bought when I was using a Mamiya RZ67 as my main camera, and purchased after taking my outfit to the shop to see if it would fit). The downsides are, first and foremost, the ground glass. As I mentioned in another post, I find the Fresnel rings really distracting (I have no problems with the other two). Added to that, the front rise and fall seem imprecise (but I started with a camera that had geared rise and fall); coupled with a slight stiffness (and, no, I've never tried lubricating it) it makes it more difficult than I'd like when I'm behind the camera and under the focussing cloth to adjust. The fixed 12" belows also place a restriction on lenses, the more so as I favour longer rather than shorter focal lengths.

The Canham DLC45 is best described (if you haven't seen one) as made from Meccano. It's metal, but with more holes than a Swiss cheese to reduce the weight, which comes in between Wista and Walker. It packs down into its own padded bag (which has a shoulder strap) and so doesn't go into the back pack. The movements are smoother than the Wista and about the same as the Walker. The bellows are the longest (by a whisker) of the three, and are interchangeable (as are the Walker's). The downside is the setting up time. Setting up requires that a couple of locking catches are first released, but the pivot is a vertical one, meaning that the camera can't easily be erected on a table (or car seat) - it's best done on a tripod. Packing down is the same, and it is difficult (probably down to lack of great experience doing it) to pack down unless it's on the tripod. The other feature that the others don't have is an extra step with the front standard - it's collapsed with the front standard out of a groove that it needs to be in to operate, so there's an extra small step in the setting up to ensure that it's in the groove. In use, it feels "right", and operates smoothly. The packing down is more of a problem because the camera does not have a strap for carrying it, and so needs to be packed down to move, unless carried on a tripod. I'm happy carrying the other two for reasonable distances set up, but off tripod, by their straps and it saves time as I only have one lens that can be left on camera and the camera still packed down. The Canham is more fiddly in this respect. On tripod, it's probably the smoothest operator of the three (but if so, only by a whisker over the Walker).

The Walker is, as noted, made from ABS. It's just as rigid as the others (well, actually it's more rigid than the Wista) and works smoothly. It's as easy as the Wista to pack down - slightly less fiddly in fact, and takes the same lens panels as the Wista (the Canham doesn't). The ground glass screen is an Ebony one - or marked with the Ebony name at any rate). The only two cons are the weight - it's the heaviest of the three - and the size. The other two have the front and rear standard the same area, so the cameras pack down into a normal box shape; the Walker has a larger rear standard which protrudes beyond the front when packed down, making it larger. It still goes in the backpack, but it's a close thing.

If I'd been able to buy a Walker earlier, I wouldn't have bought the Canham which I got second hand from Robert White some years ago when they had one of their events in Poole. At that time, the Titan was out of production, and second hand ones never seemed to appear. When Mike Walker finally made the last ten, I snapped one up. From the serial numbers (mine is 995) I suspect that the production run was only 1000 cameras. If I had to get rid of two of my 5x4s, the Walker is the one I'd keep. I rather like (in theory - we don't have a dishwasher) being able to clean a muddy camera in a dishwasher. You have to remove the bellows, but even so it says something about water resistance and lack of warping.

The next photo shows the Wista ground glass without any shading from a focussing cloth or hood on a sunny day.